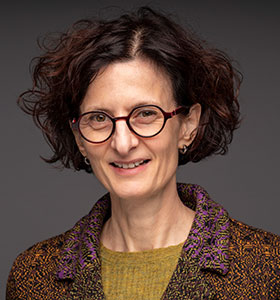 Dr. Marie Giroux received her medical degree from the University of Sherbrooke in 1988 and completed her family medicine residency in New Brunswick and Quebec. She received her Certification in the College of Family Physicians of Canada (CCFP) in 1990 and became a Fellow in 2003.

Dr. Giroux practises comprehensive family medicine at the family medicine unit of Estrie and the family medicine group of Deux-Rives in Sherbrooke, Quebec. She also practised perinatal and obstetric care for 18 years and spent three years working in an emergency room. Dr. Giroux has interests in women’s health, mental health, and cognitive therapy, as well as physician health.

In the Faculty of Medicine and Health Sciences at the University of Sherbrooke Dr. Giroux serves as Vice Dean, Teacher and Professional Development. From 2008 to 2017 she served as the university’s chair, Department of Family Medicine and Emergency Medicine. Dr. Giroux has served as president of the provincial panel of family medicine academic directors, and from 2014 to 2016 was also president of the Association of Canadian Chairs of Family Medicine.

Among her many leadership roles, Dr. Giroux was a member of the Collège québécois des médecins de famille (CQMF) Board of Directors from 2009 to 2012. In 2012 she initiated the reinstatement of the Quebec Symposium for Teachers in Family Medicine. From 2014 to 2015 Dr. Giroux served on the CFPC’s Board of Directors.

Dr. Giroux received an Award of Excellence from the CQMF and the CFPC in 2012, and the CFPC’s W. Victor Johnston Award in 2017.