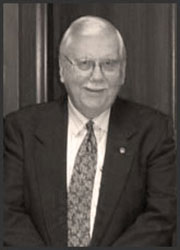 Reflecting on his path in this field, Dr. Hennen said, “I knew early on I wanted to provide family-centred care. The health of the family is a key influence on the health of the individual. I wanted to go beyond the problems facing the person in front of me and work with whole families.”

After completing medical school in 1962 at Queen’s University he interned at Kingston General Hospital and joined a family practice in Orillia, Ontario. In those early years he wondered whether he was doing all he could to support patients, so he pursued postgraduate training.

In 1969 he accepted an invitation to join the newly established family medicine department at Western from Dr. Ian McWhinney, the founding chair. The first Certification Examination in Family Medicine was offered the same year. Dr. Hennen wrote it and was one of a dozen doctors who earned the newly minted Certification in the College of Family Physicians of Canada (CCFP).

“It helped equip me with the tools and training I needed to join the team at Western,” he said. “The exam was pretty groundbreaking, specifically the simulated patient exam. I believe it is still one of the most effective learning and feedback tools available, regardless of the career stage of the participant.”

When considering what has changed over the 50 years since he earned his CCFP, Dr. Hennen noted, “It took a while for medical schools and the health system to recognize the central role and value of family medicine in supporting better health and better quality of life. Family physicians practise general medicine. [It is] a specialized area of learning; however, our role within the health system needs to be as true generalists.”

“One of the greatest advancements for people with developmental disabilities is the de-institutionalization of care. Living in small-scale group homes allows for friendships to form, a sense of independence to develop, and community linkages to be made,” said Dr. Hennen.

About 14 years ago his commitment to supporting people with disabilities was reinforced with the birth of his fourth grandchild, who has Down syndrome. “When he was born, I accepted that he would challenge me forever to do everything I could to support persons with developmental disabilities. And to get it right.”