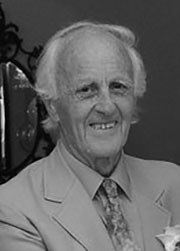 In 1966 in Galway, Ireland, Dr. Eoin Ó Dochartaigh spotted a small ad in the back pages of the British Medical Journal (BMJ). It was inviting applications to a new residency program in family medicine at McMaster University in Hamilton, Ontario. Dr. Ó Dochartaigh was in the midst of his internship at the main teaching hospital in Galway, after having completed his undergraduate medical education at the medical school at University College in Galway.

He was already interested in family medicine, following an afternoon spent with Professor Richard Scott—one of family medicine’s earliest pioneers—while attending a medical student conference in Edinburgh, United Kingdom. Dr. Scott was pivotal in setting up Edinburgh’s first ever university general practices in 1948, and then developed the University of Edinburgh’s General Practice Teaching Unit.

“Dr. Scott exposed me and other students to principles and practices that guided me into family medicine. When I saw the ad for McMaster in the BMJ I knew I needed to apply. It was certainly a seminal moment,” said Dr. Ó Dochartaigh.

Dr. Ó Dochartaigh described his experience at McMaster as a revelation. The approach was ground-breaking with its emphasis on the dynamics of first contact care, the idea of an overall diagnosis, the central importance of the doctor-patient relationship, and the significance of care continuity—often to generations of families. “While at times nerve-wracking, McMaster shaped me as a family doctor,” he said.

In June 1969 Dr. Ó Dochartaigh was still in Canada when the first Certification Examination in Family Medicine was held by the College of Family Physicians of Canada at the McMaster University Clinic. Despite the familiarity with the surroundings, he described the exam as having a space-age feel to it, with countless techniques being tested and constant observation. “In fact it served as an appropriate appetizer to the moon landing a month later. My wife Niamh and I watched it on television in Ancaster, Ontario, where I had my ‘baptism of fire’ as Dr. Rich Bethune’s locum in July 1969. I felt as if I had been launched into the brave new world, all aglow in my own shiny new space suit of knowledge, skills, and attitude!”

At the end of 1969 Dr. Ó Dochartaigh moved to the University of Edinburgh where he took up an appointment as a lecturer in the Department of General Practice, and then two years later moved to University College Cork as the first Student Health Officer and Assistant to the Dean of the Medical Faculty. In 1974, he returned home to Galway to set up a family medicine practice and also worked part-time as Director of Vocational Training in Family Practice for the Western Health Board Area.

Dr. Ó Dochartaigh retired from medical practice in 2012, and together with Niamh set up a self-publishing operation. Their business Ardcru Books has produced six titles on a wide range of topics that sit close to their hearts. Thinking back on his time in Canada, Dr. Ó Dochartaigh fondly remembers the excitement of those years and the warmth and hospitality of their many new friends.

“Those were the days!”