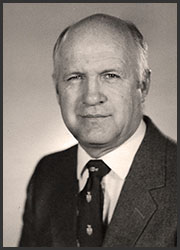 Dr. Stewart was born in Regina, Saskatchewan. After graduating from Campion College he played football for the Saskatchewan Roughriders. With a passion for both sports and medicine, he ultimately chose to attend medical school (with warmer weather) at the University of British Columbia in Vancouver.

“In 1952 I joined the third class of the new UBC medical school,” said Dr. Stewart. “I was interested in all aspects of medicine, so general practice made sense for me.” He was also still interested in football, so he played quarterback for the UBC Thunderbirds.

After he completed medical school in 1956, he did his internship in Calgary, Alberta. It was there that he fell in love with his landlord’s daughter. Luckily the feelings were mutual and he married his wife, Ellen, in June 1958. When an opportunity came up in Kelowna in 1959, they headed west. They put down roots, raised seven children, and made a mark on the medical community.

As a family doctor working in what was then a small town, Dr. Stewart did it all. He joined the Knox Clinic (one of two in Kelowna), where the physicians delivered babies, cared for people of all ages, performed surgeries, and provided palliative care. The two clinics shared their resources. When both clinics needed an anesthesiologist, Dr. Stewart went for training. When they needed someone with expertise in pediatric anesthesia, he got more training. “I love a challenge and you have to keep learning. Medicine moves so quickly, you have to be sure to keep up.”

As the hospital in Kelowna expanded and more specialists became available, the nature of the clinic’s work changed. Dr. Stewart was well connected to the hospital and started to assist in surgeries. “I think family doctors need a close connection to their hospitals. Participating in rounds helps you better support your patients and learn. Being present for a patient’s surgery can be very reassuring to that person.”

In addition to his family practice, Dr. Stewart volunteered his services in St. Lucia and covered for a doctor in New Zealand. Now 88, he retired completely from medicine in 2018 but has not slowed down. He continues to organize an annual golf tournament for doctors in British Columbia and even helped give flu shots (and sage advice) to the 200 residents at his retirement home in Kelowna.

Looking back to 1969, when he wrote the new Certification Examination in Family Medicine, he said, “I was already in practice for 10 years at that point, but I believed in what the College of Family Physicians of Canada [CFPC] was doing. General and family practice needed to be recognized as a specialized area of training. So, I studied and wrote the exam. I stayed involved and helped out in the coming years.”

He chuckled as he remembered some of the pranks he and his colleagues pulled on Dr. Don Rice, the Executive Director of the CFPC at the time. “We used to say the devil made us do it.”