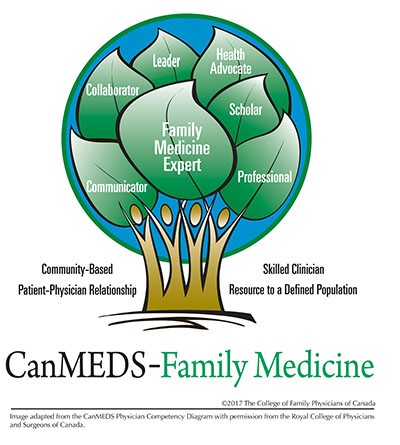 Competency framework for family physicians across the continuum of education

CanMEDS–Family Medicine (CanMEDS-FM) 2017 is a competency framework designed for all family physicians regardless of practice type, location, or populations served. Together with the College of Family Physicians of Canada’s (CFPC) Family Medicine Professional Profile, it forms an overall picture of the roles and responsibilities of Canadian family physicians along with the competencies required to support their work.

Key changes and new elements in this version compared to CanMEDS-FM 2009 include:

All seven Roles were revised; however, the Family Medicine Expert Role underwent the most extensive adaptation, aiming to integrate competencies across all Roles.

CanMEDS-FM applies to all family physicians. The Role descriptions and enabling competencies are independent of practice context, practice type, and population served. Taken as a whole, it captures both the common and distinctive competency requirements for family physicians.

The framework defines the abilities needed by family physicians across the educational continuum of undergraduate, postgraduate, enhanced skills training, and continuing professional development.

It does not define levels of competence, also referred to as benchmarks or milestones.

It can be used by others who work with family physicians in medical education, family medicine research, quality improvement, and more broadly within the health care system.

CanMEDS-FM 2017 is Relevant to CPD